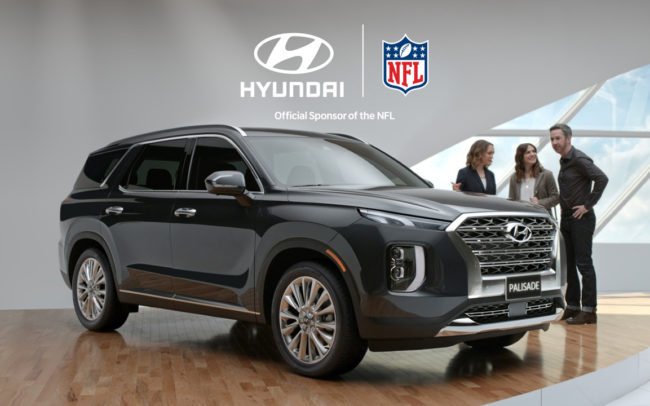 FOUNTAIN VALLEY, Calif., Feb. 13, 2019 – Hyundai was a big winner in this year’s Super Bowl as consumers ranked “The Elevator” the fourth best commercial overall and No. 1 automotive ad on USA TODAY’s Ad Meter. In addition, the spot scored 623—well above normal—on Ace Metrix and outperformed all other non-luxury automotive brands.

Hyundai’s chart-topping commercial also drove digital activity for the brand and interest in the first-ever Palisade. HyundaiUSA.com web traffic spiked significantly during the hour of the commercial, as did traffic to the Shopper Assurance and SUV Family landing pages. In addition, web tracking revealed that the Palisade model had a 654 percent lift on Edmunds.com and on Cars.com Hyundai received a 1,831 percent surge in traffic to brand pages during the game.

“We’re proud that ‘The Elevator’ ranked highly on USA Today’s Ad Meter and is one of the most watched Super Bowl commercials of all time,” said Dean Evans, chief marketing officer, Hyundai Motor America. “Jason Bateman’s comedic delivery, combined with funny relatable life moments and topped off with our flagship Palisade cameo, made for the perfect recipe composed by our creative team. We’re happy to see the ad’s message resonated strongly with people and drove consumer action across a variety of digital properties, including millions of organic views before and after the game.”

The success of Hyundai’s Super Bowl advertising campaign extends beyond the digital sphere with national media acclaim, including top rankings and recognitions from leading news authorities such as:

Hyundai Motor America
Hyundai Motor America is focused on delivering an outstanding customer experience grounded in design leadership, engineering excellence and exceptional value in every vehicle we sell. Hyundai’s technology-rich product lineup of cars, SUVs and alternative-powered electric and fuel cell vehicles is backed by Hyundai Assurance—our promise to deliver peace of mind to our customers. Hyundai vehicles are sold and serviced through more than 830 dealerships nationwide and the majority sold in the U.S. are built at U.S. manufacturing facilities, including Hyundai Motor Manufacturing Alabama. Hyundai Motor America is headquartered in Fountain Valley, California, and is a subsidiary of Hyundai Motor Company of Korea.