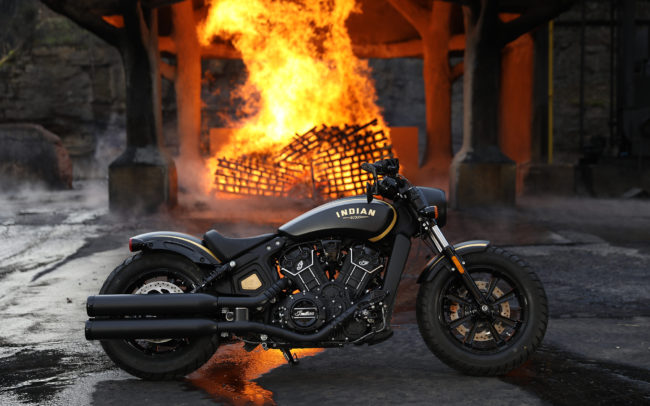 Only 177 of these bikes will be built globally with the build number a nod to the “Old No. 7 Brand”. For the third straight year, Indian Motorcycle joined forces with Klock Werks Kustom Cycles to create these bikes, taking inspiration from the gold and black fire trucks used by the Jack Daniel’s Fire Brigade, the only distillery in the world with its own fire brigade. Steve Menneto, Indian Motorcycle President said: “Our partnership with Jack Daniel’s celebrates American craftsmanship of the highest order. This year’s limited-edition bike draws inspiration from the incredible story of Jack Daniel’s Fire Brigade, while honouring the passion and dedication of firefighters and emergency medical responders who serve our country.” Each of the 177 individually numbered motorcycles are accented with Jack Daniel’s Fire Brigade themes. The bike has subtle two-tone matte black paint, a first for Indian Motorcycle, and is covered in real 24-karat gold graphics on the tank and fenders. The 24-karat gold carries through to the Fire Brigade emblem on the tank and the “Bottles and Throttles Don’t Mix” emblem on the front fender.

Other custom details include a perforated genuine leather seat with Jack Daniel’s embroidery and custom grips, pegs, and shift levers inspired by the Old No. 7 Brand.

Premium gloss black finishes on the fender struts, hand control levers, engine valve covers, and exhaust tips, while a gold coloured Indian Scout badge further showcases the attention to detail given in the design of this limited-edition bike. “The public’s response to the motorcycles that Indian Motorcycle and Jack Daniel’s have collaborated on has vastly exceeded our expectations year-over-year,” said Greg Luehrs, Director of Events and Sponsorships for Jack Daniel’s. “In celebration of this great partnership and our own Jack Daniel’s Fire Brigade, we are delighted to deliver a bike that honours firefighters and EMS first responders while also reinforcing the message that “Bottles and Throttles Don’t Mix.”

To reserve one, visit or call your local Indian Motorcycle dealership.

Pricing starts at $15,999 in the U.S. and $19,999 in Canada. Prices in EMEA to be announced. Please note – not every country in the EMEA region will be able to sell this model due to alcohol advertising rules.

Each comes with a two-year unlimited mileage factory warranty and free membership in the Indian Motorcycle Riders Group™ for one year.

The limited edition Scout Bobbers will be hand-painted and built, with delivery starting in July 2018.

ABOUT INDIAN MOTORCYCLE
Indian Motorcycle is America’s first motorcycle company. Founded in 1901, Indian Motorcycle has won the hearts of motorcyclists around the world and earned distinction as one of America’s most legendary and iconic brands through unrivalled racing dominance, engineering prowess and countless innovations and industry firsts. Today that heritage and passion is reignited under new brand stewardship. To learn more, please visit www.indianmotorcycle.eu.