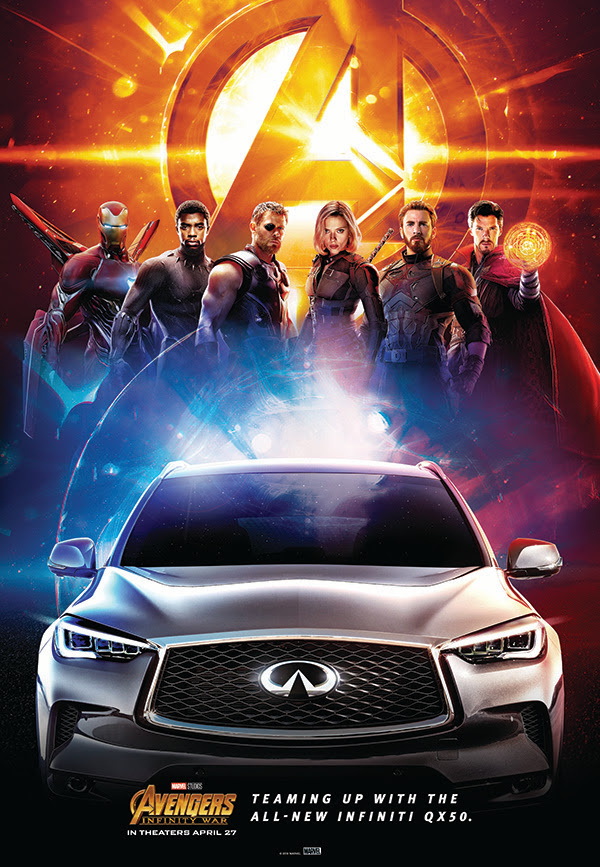 NASHVILLE, Tenn. – INFINITI announced today that it is teaming up with Marvel Studios’ “Avengers: Infinity War” to celebrate the launch of the all-new luxury midsize crossover, the 2019 QX50, in showrooms now. Beginning today, the 30- and 15-second versions of the “Date Night” spot are airing on TV and online. In addition to being able to see a 90-second version of the ad in theaters beginning April 27, moviegoers will be able to catch the INFINITI QX50 in a scene in Marvel Studios’ “Avengers: Infinity War.”

“We couldn’t be more excited about working with INFINITI for the first time,” said Mindy Hamilton, Marvel’s Senior Vice President of Global Partnerships & Marketing. “Between their highly anticipated launch of the QX50 and our climactic release of ‘Avengers: Infinity War,’ we recognized a tremendous opportunity to share our mutual passions for risk-taking, adventure, excellence, and advancement with fans all around the country.”

In name and spirit, the collaboration between INFINITI and Marvel Studios’ “Avengers: Infinity War” is a dual celebration of the culmination of years of building toward an epic moment. The movie is the product of more than a decade of storytelling, and the INFINITI QX50’s engine is the result of a 20-plus year endeavor to create a powertrain that can seamlessly shift between performance and efficiency – the world’s first production-ready variable compression ratio engine, the VC-Turbo. Both tasks seemed inconceivable and unobtainable. However, commitment and meticulous preparation have delivered both.

“We are thrilled to be teaming up with Marvel Studios and The Avengers, a franchise that complements the all-new QX50’s various features as we continue to raise awareness and reach new audiences in creative and unexpected ways,” said Phil O’Connor, director, Marketing Communications and Media, INFINITI USA. “The 2019 QX50 is the most advanced INFINITI to date. It embodies everything our brand stands for: beautiful design, advanced technology and empowering performance.”

With the introduction of the 2019 INFINITI QX50, Marvel Super Heroes are not the only ones with superpowers anymore. “Date Night” highlights several of the QX50’s “superpowers” including the VC-Turbo engine, ProPILOT Assist, and the advanced craftsmanship of the interior cabin. These class-leading features translate to power and efficiency that can help anyone feel like they, too, have superpowers. And, when the universe is putting obstacles in the way – like bumper-to-bumper highway traffic and one cute grandma moving at her own pace – anyone can use a little help (especially when they are eager to see one of the most anticipated films of 2018, Marvel Studios’ “Avengers: Infinity War”).

Between April 18 and May 31, 2018, fans will also be able to experience additional INFINITI exclusives, including a behind-the-scenes featurette that explores the origins of the Infinity Stones as well as interviews with cast and crew, content from past films in the Marvel Cinematic Universe and footage from Marvel Studios’ “Avengers: Infinity War.”

“Date Night” was filmed over three days in Los Angeles. Director Anthony Leonardi with production house Bullitt, along with INFINITI and creative agency CP+B, collaborated to create the ad that will air in the United States, featuring the iconic Avengers theme music and a young couple who share the same virtues as the luxury brand.

About Marvel Studios’ “Avengers: Infinity War”
An unprecedented cinematic journey ten years in the making and spanning the entire Marvel Cinematic Universe, Marvel Studios’ “Avengers: Infinity War” brings to the screen the ultimate, deadliest showdown of all time. The Avengers and their Super Hero allies must be willing to sacrifice all in an attempt to defeat the powerful Thanos before his blitz of devastation and ruin puts an end to the universe.

About Marvel Entertainment
Marvel Entertainment, LLC, a wholly-owned subsidiary of The Walt Disney Company, is one of the world’s most prominent character-based entertainment companies, built on a proven library of more than 8,000 characters featured in a variety of media over seventy-five years. Marvel utilizes its character franchises in entertainment, licensing and publishing. For more information visit marvel.com. © 2018 MARVEL

About INFINITI
INFINITI Motor Company Ltd. is headquartered in Hong Kong with representations in 50 markets around the world. The INFINITI brand was launched in 1989. Its range of premium automobiles is currently built in manufacturing facilities in Japan, the United States, United Kingdom and China. INFINITI design studios are located in Atsugi-Shi near Yokohama, London, San Diego and Beijing. INFINITI is in the middle of a major product offensive. The brand has been widely acclaimed for its daring design and innovative driver-assistance technologies. From the 2016 season, INFINITI is a technical partner of the Renault Sport Formula One team, contributing its expertise in hybrid performance.