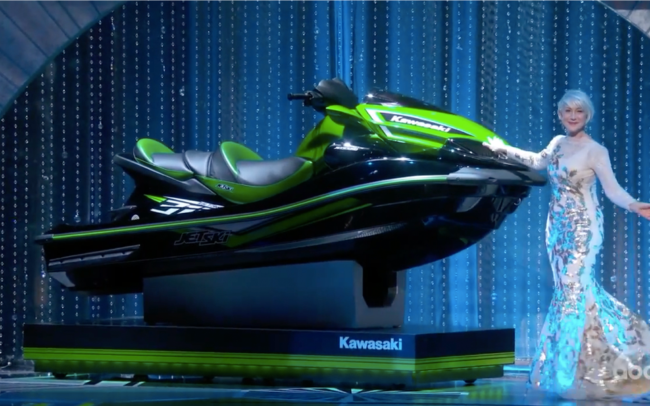 “We were honored to be approached by the Academy’s production team to act as a prize provider of a Kawasaki Jet Ski,” said Kawasaki Vice President, Marketing Chris Brull. “We were blown away with how the Jet Ski was integrated into the show by Jimmy (Kimmel) and that so many winners made mention of the Jet Ski on stage as well as on social media. This was a fantastic integration for us and we are pleased to provide a 2018 Kawasaki Jet Ski Ultra 310LX to Mark Bridges following his exciting win.”
The Jet Ski first came on stage during the show’s monologue when host Jimmy Kimmel announced it would be awarded for the shortest acceptance speech of the night. Many winners contributed to the bit, mentioning the Jet Ski in their speeches, but it was Bridges who collected the prize with a 36-second acceptance.

Kawasaki’s social media team also got in on the act through offering up posts and polls throughout the award show engaging movie fans and new customers.

ABOUT KAWASAKI
Kawasaki Heavy Industries, Ltd. (KHI) started full-scale production of motorcycles over a half-century ago. The first Kawasaki motorcycle engine was designed based on technical know-how garnered from the development and production of aircraft engines, and Kawasaki’s entry into the motorcycle industry was driven by the company’s constant effort to develop new technologies. Numerous new Kawasaki models introduced over the years have helped shape the market, and in the process have created enduring legends based on their unique engineering, power, design and riding pleasure. In the future, Kawasaki’s commitment to maintaining and furthering these strengths will surely give birth to new legends.

Kawasaki Motors Corp., U.S.A. (KMC) markets and distributes Kawasaki motorcycles, ATVs, side x sides, and Jet Ski® watercraft through a network of approximately 1,100 independent retailers, with close to an additional 7,700 retailers specializing in general purpose engines. KMC and its affiliates employ nearly 3,100 people in the United States, with approximately 260 of them located at KMC’s Foothill Ranch, California headquarters.