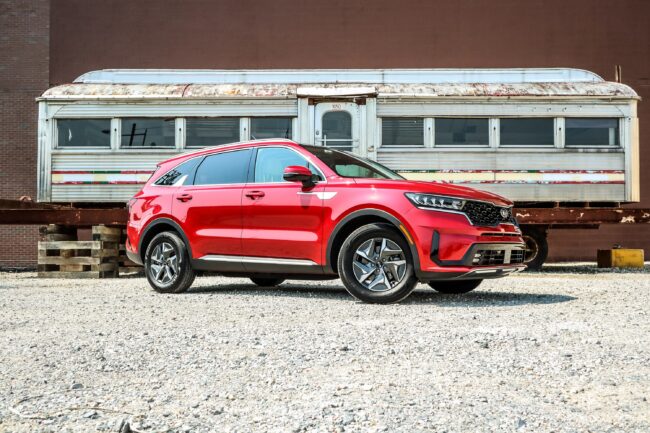 It has been some time since I have been behind the wheel of Kia Sorento. My mother owned a 2015 Kia Sorento that I drove from time to time, so to get some seat on the 2021 model is a treat. The Kia Sorento is a mid-size crossover SUV that has been produced since 2002 by the South Korean manufacturer. Kia builds the North American-market Sorento at its assembly plant in West Point, Georgia. New for this year is the Hybrid edition that was delivered for review so I was eager to see how Kia answered the call.

Upon first look, the runway red hue captured the eye. The new Sorento has a modern look with sleek and sloping hood lines, the hexagonal pattern in its grille, LED headlamps and the 17” alloy wheels. As I drove the Sorento around town, conversation centered around how much sportier the Sorento looks.

The all-new 2021 Kia Sorento Hybrid has a stylish interior featuring a panoramic sunroof, a hands-free power liftgate, and three rows of seating. I really enjoyed the second-row being captain’s chairs in place of the standard second-row rear split bench seat. The Sorento is ideal for large families as it seats up to 6 people. The Sorento Hybrid has 12.6 cubic feet of space behind the third-row seats. With the third row folded down, you can get 45 cubic feet of space. Fold down both rows and you now have 75.5 cubic feet for of cargo space which is a considerable amount if you are ever in the need to transport a hefty load.

The infotainment system has satellite radio, HD Radio, wireless device charging, a rear-seat entertainment system USB ports, Bluetooth, Apple Car Play and Android Auto, all controlled using an 8.0” touchscreen. The manual controls were conveniently placed for me to use them with ease. The explosive sound comes by the way of the 10 speaker Harman Kardon system. Kia’s UVO infotainment interface has intuitive menu layouts that are easy to work through.

The Sorento hybrid pairs with a 1.6-liter Turbocharged GDI engine putting out 227 hp and 258 pound-feet of torque, with a 6-speed automatic transmission. Paddle shifters are on the steering wheel if you are in a sporty mood for shifting. Once you hit the pedal, the Sorento accelerates quickly. It shifts smoothly, the steering is sharp and it handled rather well.  is composed, so while this isn’t the sportiest SUV out there, it has ample agility to handle winding roads. The ride is generally comfortable, even over rougher pavement. It takes time to get used to the regenerative brakes, however, which feel inconsistent.

As a parent of young children, the child car seats are extremely important to me. There are two complete sets of LATCH connectors for the second-row seats. This was a plus for me and very easy to use.

The Kia Sorento hybrid sits in a competitive class going up against the Toyota Highlander Hybrid, Honda CR-V Hybrid and the Hyundai Santa Fe Hybrid. The Sorento hybrid also has great fuel mileage coming in at 39 mpg in the city, 35 mpg on the highway and 37 mpg combined. The model that we tested came in at $38,205.00. Overall, I felt that the Kia Sorento Hybrid was engaging to drive, comfortable and a smooth ride. Over the past 10 years KIA has evolved in a way that most did not perceive and would have argued you down if you told them otherwise. It has been simply amazing to see how the brand has grown and shed away their labels from the past. 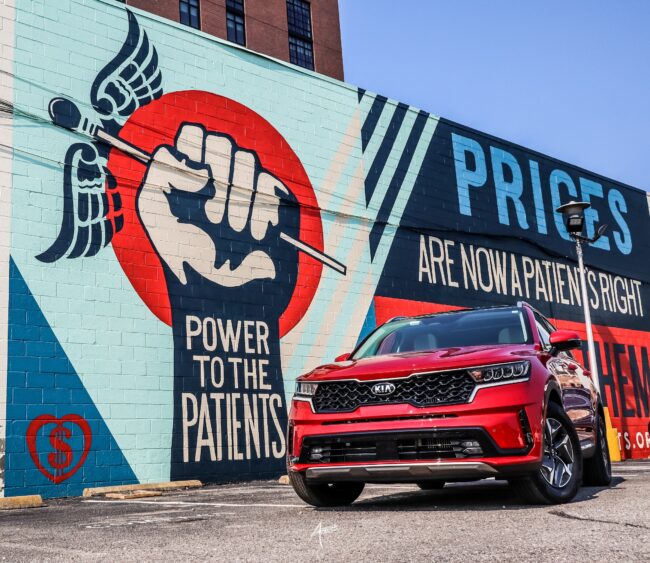