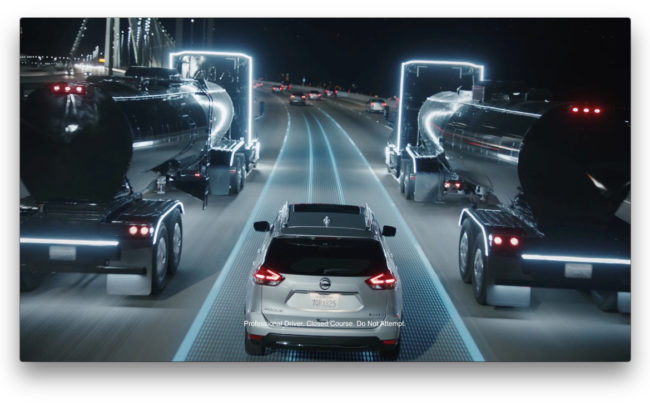 Every year on May 4th, Star Wars fans around the galaxy celebrate the film franchise, making it the perfect date for Nissan to pay tribute and begin its marketing campaign for Solo: A Star Wars Story, in theaters May 25.

NASHVILLE, Tenn. – Every year on May 4th, Star Wars fans around the galaxy celebrate the film franchise, making it the perfect date for Nissan to pay tribute and begin its marketing campaign for “Solo: A Star Wars Story,” in theaters May 25. The campaign is now officially underway with many options for fans to immerse themselves into the upcoming movie with Nissan’s top-selling model, the Nissan Rogue.

“We are excited to continue our collaboration with Lucasfilm on the upcoming movie, ‘Solo: A Star Wars Story,’ celebrating both the film and our best-selling Nissan Rogue” said Jeremy Tucker, Vice President of Marketing Communications and Media. “Whether a long journey or a long day, the ProPILOT Assist function on the Rogue makes a great sidekick to help give you confidence on the highway.”

“Straight Down the Center” Television Commercial
The television commercial starts out inside the cockpit of the Millennium Falcon, the most capable ship in the galaxy, with L3-37 at the helm and Chewie as her co-pilot. While Chewie is hesitant of the dicey situation, L3-37 is confident in the ship and her abilities to navigate the path ahead. A similar scenario is carried over to a couple in their Nissan Rogue while on the highway. When the only way is forward, the driver has the confidence to navigate through the path ahead with ProPILOT Assist – straight down the center. All while the sidekick, her dog in the back seat, expresses his concern.

Best in the Galaxy Sweepstakes*
Also live now is Nissan’s “Best in the Galaxy” sweepstakes, where fans can virtually customize a Nissan Rogue, Altima or TITAN with design elements from the upcoming movie. Upon completion, they can enter for their chance to win one of many amazing prizes. The grand prize is a custom Star Wars-inspired Nissan (Rogue, Altima or TITAN) and a Nissan-exclusive collectible replica Range Trooper helmet, produced by Gentle Giant Ltd. Additional prize winners will receive the collectible replica helmet. The sweepstakes is live now and runs through June 3. For rules and to enter, fans should visit NissanUSA.com/Solo.

Show Vehicle
Ahead, there’s an additional surprise sure to excite Star Wars fans of all generations. A Millennium Falcon-themed Nissan Rogue show vehicle will debut closer to the theater release of “Solo: A Star WarsStory.”

For more information on the Nissan vehicle lineup, visit nissannews.com.

About Nissan North America
In North America, Nissan’s operations include automotive styling, engineering, consumer and corporate financing, sales and marketing, distribution and manufacturing. Nissan is dedicated to improving the environment under the Nissan Green Program and has been recognized annually by the U.S. Environmental Protection Agency as an ENERGY STAR® Partner of the Year since 2010. More information on Nissan in North America and the complete line of Nissan and INFINITI vehicles can be found online at www.nissanusa.com and www.infinitiusa.com, or visit the U.S. media sites nissannews.com and infinitinews.com.

About Nissan Motor Co., Ltd.
Nissan is a global full-line vehicle manufacturer that sells more than 60 models under the Nissan, INFINITI and Datsun brands. In fiscal year 2016, the company sold 5.63 million vehicles globally, generating revenue of 11.72 trillion yen. In fiscal 2017, the company embarked on Nissan M.O.V.E. to 2022, a six-year plan targeting a 30% increase in annualized revenues to 16.5 trillion yen by the end of fiscal 2022, along with cumulative free cash flow of 2.5 trillion yen. As part of M.O.V.E. to 2022, the company plans to extend its leadership in electric vehicles, symbolized by the world’s best-selling all-electric vehicle in history, the Nissan LEAF. Nissan’s global headquarters in Yokohama, Japan, manages operations in six regions: Asia & Oceania; Africa, Middle East & India; China; Europe; Latin America; and North America. Nissan has a global workforce of 247,500 and has been partnered with French manufacturer Renault since 1999. In 2016, Nissan acquired a 34% stake in Mitsubishi Motors. Renault-Nissan-Mitsubishi is today the world’s largest automotive partnership, with combined annual sales of more than 10.6 million vehicles in calendar year 2017.

About “Solo: A Star Wars Story”
Board the Millennium Falcon and journey to a galaxy far, far away in “Solo: A Star Wars Story,” an all-new adventure with the most beloved scoundrel in the galaxy. Through a series of daring escapades deep within a dark and dangerous criminal underworld, Han Solo befriends his mighty future copilot Chewbacca and meets the notorious gambler Lando Calrissian, in a journey that will set the course of one of the Star Wars saga’s most unlikely heroes.