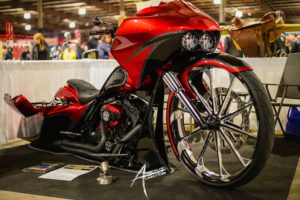 February has been unseasonably warm this year so the Timonium Motorcycle Show at the Maryland State Fairgrounds was even hotter this year than in the past. Before entering the building, seeing the large amount of motorcycles pulling up and parking gave the event a much different feel than before. The Timonium Motorcycle Show (TMS) is one of the largest motorcycle shows on the east coast. Enthusiasts, builders and patrons come to witness the wide array of custom sportbikes, baggers, choppers, drag bikes, vintage cycles and antiques of every make. The 3-day bike festival is seeing more and more attendees each year.

The highly acclaimed “Travel, Touring & Adventure” exhibit which showcases key essentials to the lifestyle of motorcyclists was back and well attended. It is a right of passage that bikers go on long road trips across the nation, along the open road to absorb the beautiful sights the region has to offer. Gracing the show’s presence were Simon and Lisa Thomas, Lois Pryce, Austin Vince, Steph Jeavons, Rob Beach – Beach’s Motorcycle Adventures, Ayres Adventures and Edelweiss Bike Travel and Skip Mascorro from MotoDiscovery. Patrons were able to hear stories, discuss routes and tips with some of the most noted, interesting and passionate motorcycle adventurists there are.

The show this year didn’t have as many custom bikes as it has showcased in past but Eastern Performance Cycles, Harley Davdison, Pete’s Cycles,  Garage Twenty-One, Design Worx and many others brought more than enough motorcycles for the all to see.  The show stopper was “Teresa’s Dream”, the 2016 Fatboy Lo built and customized by Jim Fowler at Sick Sledz. “Teresa’s Dream” was built in memoriam to Teresa “Blueiz” Christiansen who was directly involved in the build providing feedback, suggestions, guidance and input prior to her untimely passing.

Throughout the show prizes were given away by Thunder Roads Mid Atlantic, live radio broadcasts from 98 Rock and plenty of games such as the Bikes and Babes Newlywed Game and a Strong Man Competition to keep the crowd entertained. The show wouldn’t be complete without the contests from the lovely ladies of Girls of ThunderRoads. This year guests were treated to a Leather & Lace Valentine Show, Line Dance Lessons, Daisy Dukes and Cowboy Boots Fashion Show and the Bikini Contest.